I arrived in Rio, knowing that Uli would be coming as well, one of my best friends from Germany, who I haven’t seen in years. So quickly checked into my hostel in Vidigal, which is one of the most famous favelas in Rio. However, it was close to the border of Vidigal and Leblon, which is one of the richest areas. The hostel was 300m from the German Team hotel, to give you and indication how close rich and poor are in Rio. 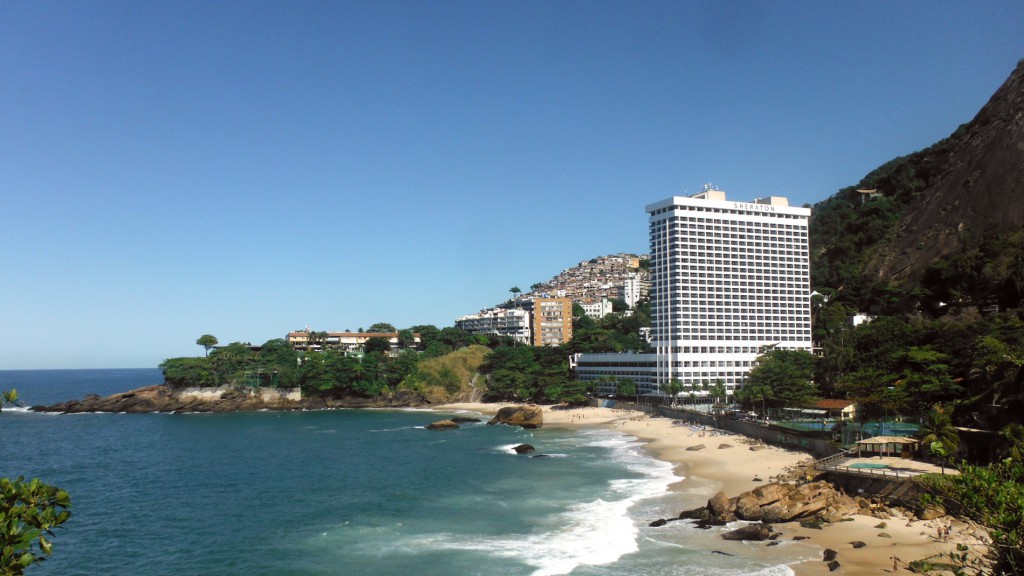 So we went out to see the Brazil Holland game for the third place with a bunch of Brazilians, all friends of Ulis friend Kavita. But we were both tired from our flights, so we only practiced a little bit for the day after. 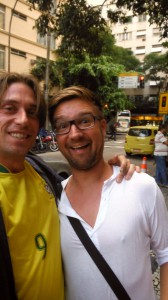 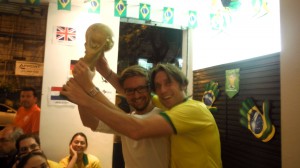 Which should be memorable in so many ways. While Uli was actually able to get a ticket (for way too much money) I watched with a bunch of random Germans behind the official Fan Fest at the Copacabana. We must have been about 50-100, maybe. We were joined by quite a number of Brazilians, who wanted to party with us. Hey, even a bunch of English guys were standing there supporting Germany (in German colours!). They asked me not to put any photos online however. But still we were outnumbered by the Argentinians by about ten to one.

I could not see the end of the game, because as soon as Germany scored with five minutes to go, some of the Argentinians that surrounded us, threw beach chairs at us, so even though we had the Brazilians protecting us. Everyone was running for the streets, where there were heavily armed policemen. I took a small hit in the rips and a scratch on the leg, while others got knocked out on the sand. Pretty intense, but it was just a few idiots.

This is not my video and it was only a third of the action, as you will notice the Germans are already gone:

Most Argentinians I met after were friendly, although still a bit sour. I found Kavita and Uli a while later at the apartment they rented around the corner and we went out to Lapa until early morning, to finish it off with a swim at Copacabana around 9h30. What a night. After I woke up in my hostel I noticed that my flag was missing. The same flag that had been on Australian and Brazilian TV and was given to me by Uli in 2006 prior to the game against Argentina. It is a pretty safe bet that some Argentinians took it, given that my hostel was full of them.

After a rest day, we did some sightseeing, going to the sugar loaf mountain and the Cristo. All worth seeing, although we probably stood in line longer than anything else that day. Again a proof that things somehow work, but just about.

I decided to join Kavita and Uli on their road trip back to São Paulo, stopping at Ilha Grande for a couple of nights and Paraty overnight. They would continue to São Paulo and I would return to Rio de Janeiro, for my last stop in Brazil.